When the Spring Beadworkers Guild journal arrived it was a lovely boost to see my Crystal Rosette Pendant in the centre pages – always a thrill to see one’s stuff in print!

Also May is the time for the BWG meetings, whether they be the Great British Bead Show or the Regional Day, and there’s always a nice build up of anticipation.

The theme for this year’s BWG Regional Day in Glasgow was Tassels and Trims. It’s always a rather exciting time leading up to the day. There’s so much preparation involved for me, sorting out family needs, making sure there’s no paperwork outstanding and finally WHAT BEADS DO I TAKE WITH ME!

I also decided to have a sneaky go at tassels before I got there. Now, leading up to this, I’d been working on the Dynasty Beads bracelet with faux coral, vintage beads but I had a horrible feeling the gold-coloured metal, round beads I was using weren’t going to stay gold for long, which would be very disappointing. I got it into my head that I’d like to make a bracelet of Dynasty Beads with 24K gold rounds interspersed with some carved turquoise stone beads. After a few searches on the internet I found some superb little hand-carved animal beads of real turquoise in both the traditional turquoise and a pale green type, so I ordered them. They arrived a few days later but were a little larger than I anticipated, however they were intriguing and I suddenly realised the beads represented the animals of the Chinese Calendar: tiger, rabbit, dragon, snake, horse, goat, monkey, rooster, dog, pig, rat and ox.

For some reason the monkey stood out from the rest and I thought “Monkey in a Cage”, don’t ask me why. I pictured this little monkey in a gilded cage, hanging from something. I made a quick sketch and set about making it. I’d never made a tassel before but I tried with what paltry knowledge and threads I had, then I added it at the end. I had a great time decorating it on the train travelling up to Glasgow. Well you can’t sit idle, can you? I’ve put the “Monkey in a Cage” in the Gallery. 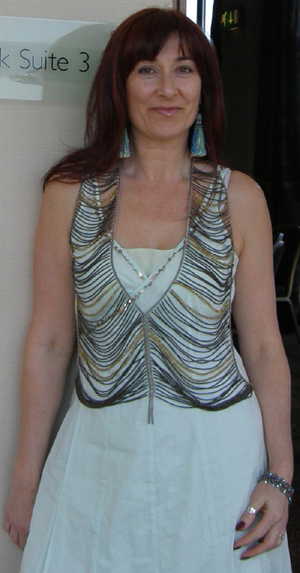 My first time in Scotland – the Hotel was really nice and the staff were lovely. The Regional Bead-In Day was terrific fun and, once again, it was so lovely to see the ‘Bead Family’ again, although there were a few missing faces as it was a long way for many to travel.

The day started with an introduction to the topics and Sylvia Fairhurst and Liz Thornton collared me to model an interesting little wire and bead bodice from the BWG collection. Sylvia took this pic of me in it at break time. Oh yes and you can see I’m also wearing my beaded tassel earrings I made before I left for Scotland, OK I went a bit tassel mad!

We all slogged away, beading and chatting and the time seemed to flash by far too quickly. After dinner we had our AGM and sadly Sylvia, our fab Chairperson said her farewells, leaving Liz to fill her shoes. Well I wish Liz every success and I know she’ll be great. I’m so fond of these lovely ladies and they are both terrifically talented beaders, with their own unique styles. The sadness definitely faded when Maria Kirk, of Nostalgia, judged the Challenge. She was utterly hilarious as a Russian spy and we were all in tears of laughter and streaked mascara at the end! Tchaikovsky and some cannon balls featured strongly!

Groan, the next day I managed to find some size 11º seed beads, size 15º Czech Charlottes AND size 15º Miyuki Delicas at the bead bazaar, that I didn’t already have. It’s gotta stop!

It was also driven home to me at the Bead-In that I’d better get my submissions in for the 2011 Great British Bead Show (GBBS). Oh My Gawd, what should I put in? Well it’s done now, so it’s up to the Committee!

Whilst pondering what to submit, I picked up the Dynasty Beads again, made some with the 24K gold rounds, embellished them with some 2mm and 3mm crystals and interspersed them with Murano foil beads. When I was at The Bead Shop in Tower Street last week, I saw they had some 3mm 24K gold rounds so I might try those with the Chinese animals! Either that or there might be a few more animals in cages soon, who knows.

St Olave necklace in Bronze and Peridot Not only does it come in Crystal AB, but I've just finished a... read more

This video tutorial is about how to do Square Stitch. It's a really useful stitch and can be used in... read more

I'm currently working my way through samples, putting kits together and writing instructions to take with me to the... read more

Fresh back from the Beadworkers Guild's 5th Biennial Bead-In at Croydon, I am all set to make plenty more... read more

Perhaps a little late but Happy Beady New Year everyone, let's hope we all have more time to bead... read more

I spent a brilliant weekend in Nottingham, with the Abbey Road Beaders teaching my Byzantine Cross workshop. I was... read more