Melanie de Miguel is an international beadwork tutor and designer, whose work has been featured in a number of exhibitions, beading books and publications.

At the age of 10, Melanie was first introduced to beads on the Greek island of Mykonos. An islander showed her how to weave on a homemade loom and from thereon she couldn’t be separated from the beads.

Having a loving and creative Grandmother had fuelled Melanie’s love of arts and crafts from an early age and, whilst her studies led her on the scientific path, she continued to experiment with beading and jewellery making.

However, Melanie’s beading skills really took off in her teens when she taught herself the various beading stitches by following thread paths and mending damaged, antique, beaded collars, bags and jewellery she had bought at antique fairs and flea markets.

Studies and babies put beading on a back burner, but when Melanie took up a teaching  post in Secondary Science, her beading re-surfaced as a relaxing medium to wind down at night time – always one to burn the midnight oil!

In 1999 Melanie attended the first Great British Bead Show (GBBS) and joined The Beadworkers Guild, which opened up a world of like-minded people. As a qualified Science teacher and a bead artist with her own designs and ideas, Melanie was encouraged by the Guild to begin teaching. Immediately she began holding private workshops at home and teaching for the Guild, and she helped to found a local beading group, the Dangerous Beaders. She soon realised how much she loved to teach beadwork and see that ‘Eureka moment’ when a student gets it and sees the potential to do their own thing! Since then, Melanie has taught workshops for bead groups throughout the UK, at the Knitting & Stitching Show, at bead fairs and beading retreats. and is now a regular tutor at the Bead & Button Show in Milwaukee, US; her work has also been featured in a number of publications and beadwork books.

When chosen to design a project to commemorate the 10th anniversary of The Beadworkers Guild in 2009, Melanie created her beaded fish Gorgeous Giorgio which then took her on a long journey of innovative work with large crystals and semi-precious stones. Since she began teaching, her work has morphed through a number of styles, most notably influenced by her scientific background in her approach to three-dimensional molecular structures and organic life forms; but she is currently driven by architectural and historical influences from mediaeval times, Byzantium and the Renaissance, designing exciting crystal jewellery that could have been worn by powerful women. Her designs are best described as intricate and innovative, incorporating minimalist beading of crystal cabochons. 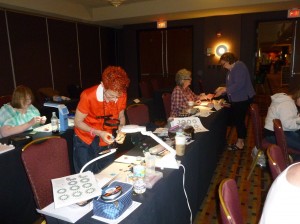 Passionate about beading and teaching, Melanie now has a Beadschool video channel on YouTube. Her video tutorials cover not only beading techniques, but also lots of tips & tricks to help solve beadwork problems, and helpful information on beading materials. In time, Melanie aims to publish videos covering all beading techniques and some of her own designs, to create a comprehensive library for all levels of beadworkers.

Melanie realised her designing skills really took off when she had built up a solid arsenal of beading techniques with which to attack every project. Her fascination with threadpaths and constant desire to experiment led her to create an exciting new beadwork technique – Hubble stitch. Publishing Let’s Hubble!, her first book, was the logical next step; it was released on 11th May, 2015 and sold out quickly, reaching the No.1 bestseller in the Beadwork and Jewellery categories. She is now preparing to write her second book.

Continuing on the path of innovation, Melanie recently took part in a ground-breaking event – teaching a Hubble Stitch Masterclass via Webinar to students in Bloomin’ Beads Etc., in Columbus, Ohio and a student in New York, all from her office in London!

Melanie lives in London with her husband, their eldest daughter, Jack the devil cat and  Charlie the penguin cat.