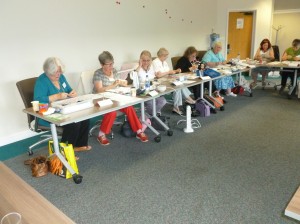 Arriving home from the Great British Bead Show, 2013, I was greeted with such a mountain of paperwork for the family bizz,  and preparation to do for the Bead & Button Show next month, that it’s taken me this long to sit down blog about it! But, as I’ve just received word that my kits for the B&B have arrived safely with the show organisers, I can relax a bit and get on with other business.

The Great British Bead Show was exactly that. The Beadworkers Guild committee members, working behind the scenes, put on a fabulous show, which must have taken an enormous organisational effort to make things go so smoothly. I taught 2 workshops there over the course of 3 days, and my students gave me terrific feedback about their enjoyment of the show. As always it was wonderful to see old beady friends and be able to catch up at leisure in the evenings, but it was also heart-warming to see a number of new faces. I had a relative newcomer to the Guild in my Isabella workshop (Erika), and her enthusiasm for beadwork and everything she was learning at the show was infectious, in the nicest possible way – it reminded me of myself at my first GBBS in 1999; I was blown away by the creative doors that had opened to me, and went home almost exploding with ideas and designs; everyone I met had been so kind, warm and generous in so many ways. So, every time I go back to the show, I know there’ll always be that same atmosphere – excitement, anticipation, delight with what we’ve made and bought, and the joy of sharing our creations and news with other like-minded souls. 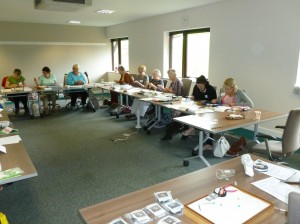 These two images show students working hard in my Isabella class – intense but a lot of fun. Workshops are such a fabulous medium in which to learn, because it’s actually a rich pool of resources whereby students not only learn from the tutor, but also pick up tips and inspiration from one another, and there’s a lot of sharing of materials too.

The AGM ended on a comedy note as has become the norm, and we weren’t disappointed. Some members had adapted the lyrics of “Oh, You Beautiful Doll”, which became “Oh, You Beautiful Beads”, and they had us all laughing and singing along to the chorus. Then, of course, after a rather late Saturday night of much merriment, there was the bead bazaar all day Sunday, full of treasures, where we could hunt, to our hearts’ content, for things on a shopping list, things we don’t have, things we might need or things we may never need but just desire because they’re beautiful.

Whatever the Great British Bead Show means to each individual, everyone appeared to be leaving with a smile and maybe a slight sadness that it was all over too soon. Still, the next one’s in 2015 and before that, there’ll be the Beading Festival Saturday Bead In and Sunday bead bazaar in 2014, so just enough time to finish off those UFOs and save up for more goodies!

I believe almost a year has gone by since I was last able to write my Bead Blog! It's... read more

Great Escapes and the Beading Challenge

Apologies for not writing this up yet, but I have been focused on preparing for the Bead & Button... read more

Hubble Stitch in the US of A!

AND…… Hubble Stitch is due for release in the US on 24th June, and can be pre-ordered on Amazon here. This is... read more

When the Spring Beadworkers Guild journal arrived it was a lovely boost to see my Crystal Rosette Pendant in... read more

Nefertiti's Treasure necklaces There's still time to treat yourself or make a present for that someone special, so I've dropped the... read more

Last night we went to the Festival Hall and happened upon a group of craftworkers sitting, chilling and doing... read more

This Beadschool tutorial is about Odd Count Peyote Stitch. The clue is in the name - you are working... read more