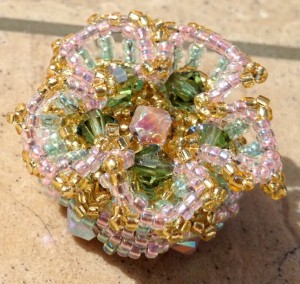 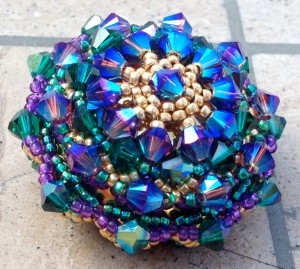 I’ve just finished two buttons that I’ve made for The Button Project exhibition at the Heritage Centre in Macclesfield which is part of the Barnaby Festival, June 2013. Both were worked in a combination of Netting, Peyote, Brick Stitch, Albion Stitch and Square Stitch, using Swarovski 3mm bi-cone crystals and Miyuki and Matsuno size 15º seed beads. It was actually quite relaxing, just beading little objects and getting them finished at one sitting, and going where the beads took me – I was pretty much on ‘autobead’. I think I needed that little oasis of calm in amongst the storm of assembling kits for my workshops at the Bead & Button Show and the Great British Bead Show at Daventry.

Right, I’m off to post them to the Heritage Centre in Macclesfield.

Wanting to share in the ‘LOVE’ that’s spreading at #lovebeadlove, the fabulous new blog and brainchild of Marcia DeCoster, I... read more

Cover of Bead Magazine Issue 60 I'd completely forgotten an interview I did with Katie Dean for Bead Magazine, until... read more

As a beadwork tutor, I see many of my students struggling to thread a needle, which takes up a... read more

Hubble Stitch in the Alps

I’ve just arrived back from a fab week teaching in the Les Carroz in the French Alps at The Alpine Experience,... read more

I see many students who are new to beading, struggling to pick up their seed beads and crystals. Try... read more

I could never have dreamed I'd be teaching in New York, let alone two workshops! I have Perry Bookstein... read more

What a fantastic weekend I had with the girls at my Byzantine Cross workshop in Barnett Hill with Great Escapes! It was... read more

I spent a brilliant weekend in Nottingham, with the Abbey Road Beaders teaching my Byzantine Cross workshop. I was... read more

It can be soul-destroying when you've put so much hard work into making a treasured piece of jewellery, and... read more