All because I was too lazy to put some beads away!

Having made the Big Green Basket in ’98, I went on to make a few smaller versions in 2003, the 1st of which was a little, orange snake charmer-style vessel. As I’d now become a bead soup addict, I had mixed up quite a lot of beads from the orange end of the spectrum, but the vessel began to bore me, so I finished it off, but left a lot of unused soup. These beads stayed in a pot for a few months, but they nagged away at me. 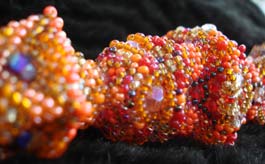 One evening in 2004, I resolved to explore tubular peyote and decided it would be fun to make something, whilst at the same time sorting the orangey beads back into their appropriate homes.

This is the result (right). There was something enormously satisfying about picking through the bead mix and finding each one as I needed it. I even threw in big crystals, red beads and some beads I had never really liked as they were old and uneven, and I became increasingly intrigued as the piece took on strange contours.

It grew longer and longer until I had to stop, as I realised it would have no purpose other than to cause people to say “What is it?” So, what exactly was it? It had its first public appearance at the next Regional Day and startled a few members with it (especially in light of the fact that the challenge for the year was “Exotica”, which had been misinterpreted by a few enthusiastic beaders as “Erotica” – bless them), I told my little Louise it was a beady kaleidoscope because it was pretty amazing to peep through – totally hollow. 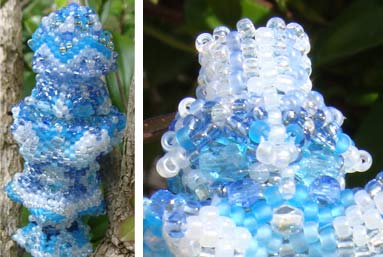 Apart from using this orange entity and the subsequent blue one as teaching aids, I put both pieces aside for 4 years, hoping that they’d have a purpose one day.

Having played around making cabochons with the gorgeous rivolis, whilst in Spain in January, Archimedes hit me on the head again, and I saw them as lids for amphoras (or maybe it should be amphorae). I returned to the pale blue entity (left) and transformed it into my second amphora. More to come – they’re such fun to make and will be a workshop. The Blue Amphora is another product of leftovers; this time from the blue vase which has my grapevine entwined around it. This piece almost wound up as another unidentifiable entity and was originally twice the length seen here.